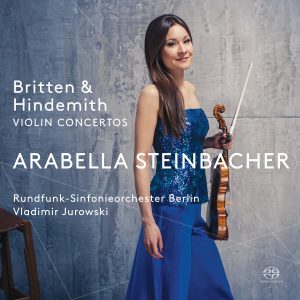 On October 1st 2017, Arabella Steinbacher‘s new album has been released on Pentatone, featuring the violin concertos by Benjamin Britten and Paul Hindemith with the Berlin Radio Symphony Orchestra under Vladimir Jurowski!

„For me as an artist, the violin concertos by Benjamin Britten and Paul Hindemith represent a great challenge. It is precisely their juxtaposition that appeals so greatly to me, partly because Britten and Hindemith completed their concertos at about the same time. Both had a premonition in 1939 of the global conflagration which would be triggered by World War II, both left their native country. And in my view, the concertos are absolutely bursting with emotional turmoil, persisting precariousness, and latent despair.“ – Arabella Steinbacher