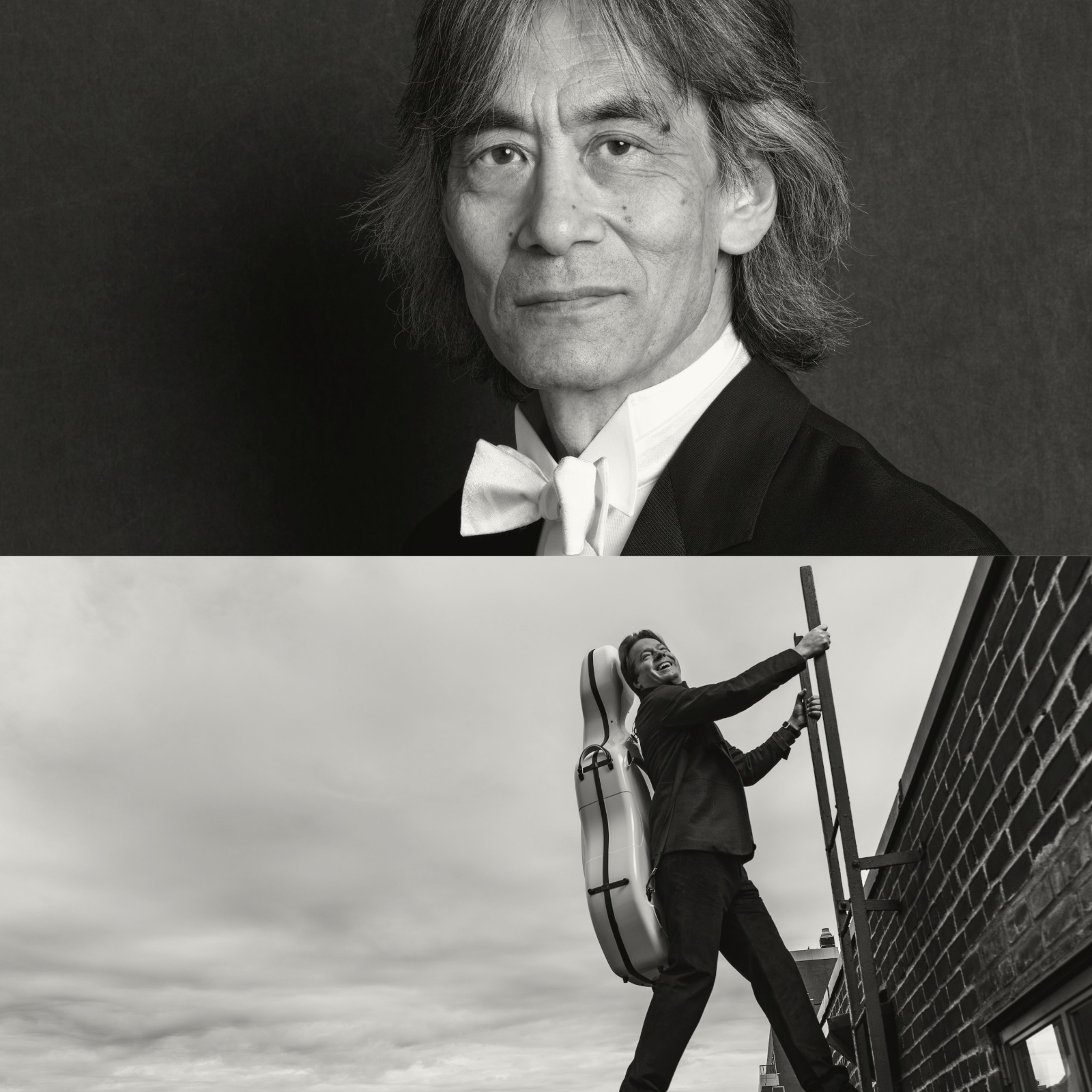 For the orchestra’s first return to the US in over 50 years, and their Carnegie Hall debut, General Music Director, Kent Nagano will lead the orchestra in a program including Brahms Schicksalslied for choir and orchestra, Beethoven’s Symphony No. 8, and the world premiere of An einem klaren Tag – On a Clear Day a new work by American composer Sean Shepherd with texts from a cycle of poems by Ulla Hahn, for cello, choirs, and orchestra commissioned by the Hamburg Philharmonic State Orchestra and the Dresden Music Festival.

This international group of young singers (ages 11-27) will be composed of members of the Alsterspatzen Hamburg (the children’s choir of the Hamburg State Opera), the Audi Jugendchorakademie, soloists of the Dresden Kreuzchor, The Young ClassX Ensemble, and the Young New Yorkers’ Chorus. They will spend the week in New York rehearsing and making music together, culminating in the performance and world premiere.

“[Under Kent Nagano] the whole evening is electrified, the music pulses ceaselessly, the rhythm is sharpened, everything flows”

“[Sean Shepherd is] an exciting composer of the new American generation”

Tickets are on sale through the Carnegie Hall website, www.carnegiehall.org by calling CarnegieCharge +1 212-247-7800, and at the Carnegie Hall box office at 57th Street and Seventh Avenue, beginning November 10, 2022.

Regular ticket prices start at $35. Student and Senior rush tickets are available for $25 at the Carnegie Hall box office. Students must show ID.

The concert is graciously supported by the Michael Otto Stiftung.

Kent Nagano, General Music Director of the Hamburg Philharmonic State Orchestra, says: “This program is our response to a precarious and divisive moment in our shared journey. The Hamburg Philharmonic State Orchestra and I are deeply inspired by the opportunity to share our tradition with New Yorkers for the first time at Carnegie Hall. Featuring the voices of youth spanning the Atlantic coastlines to express the urgency and unlimited imagination, embracing a united future. Unfettered by our human faults and cycles of history, the sovereign, ironic Beethoven 8th Symphony is paired with Brahms’ Schicksalslied, wrestling with the fate of ‘poor suffering mortals’ and is followed by the world premiere of Sean Shepherd’s An einem klaren Tag – On a Clear Day, setting the iconic poetry of Ulla Hahn, in a work that bridges the old and new worlds, demanding our next generations be heard above today’s cacophony.”

Jan Vogler, soloist, renowned cellist and Intendant of the Dresden Music Festival, says: “What a joy to share the stage with young singers from Germany and America. This concert is bringing together so many important elements: a new piece will be born-in presence of great works by Brahms and Beethoven. And a bridge is built through music, between generations, countries and the cities of Hamburg, New York, and Dresden”

Tanja Dorn, President and CEO of presenter Dorn Music says: “I am elated that Dorn Music will present the Carnegie Hall debut of the Hamburg Philharmonic State Orchestra with their general music director Kent Nagano and of course with the fantastic cellist Jan Vogler. This concert is bound to create long-lasting ties between all of the musicians on stage, young and old. We are bringing together choirs from all over the world, and uniting New York City, Hamburg, and Dresden in cultural exchange and a display of the human interconnectedness that has always been at the heart of music making.”

Kent Nagano is considered one of the outstanding conductors for both operatic and orchestral repertoire. He has been General Music Director of the Hamburg State Opera and of the Hamburg Philharmonic State Orchestra since September 2015. In addition, he is very committed as Artistic Director of the Wagner Readings with the Dresden Festival Orchestra and Concerto Köln.

Jan Vogler’s distinguished career has brought him together with renowned conductors and internationally acclaimed orchestras around the world, such as New York Philharmonic, Leipzig Gewandhaus Orchestra, Deutsches Symphonie-Orchester Berlin and London Philharmonic Orchestra. His great ability allowed him to explore the sound boundaries of the cello and to establish an intensive dialogue with contemporary composers and artists. This includes regular world premieres, including works by John Harbison (with Mira Wang and the Boston Symphony Orchestra), Wolfgang Rihm (Double Concerto with Mira Wang), Jörg Widman (Cello Concerto Dunkle Saiten, dedicated to Jan Vogler himself) and Nico Muhly/USA, Sven Helbig/D and Zhou-Long/CHN (Drei Kontinente – Konzert für Cello und Orchester, composed for Jan Vogler). Jan Vogler has been the Intendant of the Dresden Music Festival since 2009.

An exciting composer of the new American generation” (New York Times), and a “vital taste of the future” (Boston Globe), Sean Shepherd has earned wide acclaim and commissions from major ensembles and performers across the US and Europe. His music has been commissioned and performed by the BBC, Boston, Montréal, National symphony orchestras, radio orchestras in Austria, France, and Germany, and by leading European ensembles including Ensemble intercontemporain, Scharoun Ensemble Berlin, Asko|Schönberg Ensemble, and Birmingham Contemporary Music Group.

After serving as the Daniel R. Lewis Composer Fellow at the Cleveland Orchestra and composer-in-residence of Reno Philharmonic, his hometown orchestra, Shepherd was named the New York Philharmonic’s inaugural Kravis Emerging Composer in 2012. In fall 2022, Shepherd joins the faculty of the University of Chicago as a visiting professor of composition.

Philharmonic concerts have been performed in Hamburg since 1828, artists such as Clara Schumann, Franz Liszt and Johannes Brahms being regular guests of the orchestra. The history of the opera company goes back even further: Hamburg has been home to an opera house since 1678. The Philharmonic State Orchestra carries the tradition of music and the historic sound of the city of Hamburg; a concert and opera orchestra in one.

The Philharmonic State Orchestra offers approximately 35 concerts per season and performs more than 240 performances per year at the Hamburg State Opera and the Hamburg Ballet John Neumeier, making it Hamburg’s busiest orchestra. The stylistic bandwidth covered by the 140 musicians, ranging from historically informed performance practice to contemporary works and including concert, opera and ballet repertoire, is unique throughout Germany.

Over the course of its 45 year history, the Dresden Music Festival has established itself as a distinctive cultural institution in Europe and has attracted an audience far beyond Germany’s borders. Throughout May and June, renowned orchestras, top-class soloists, and ensembles come to Dresden to perform at the city’s most beautiful historic and contemporary venues and fill Dresden and Saxony with music

The festival offers a wide range of orchestral, chamber, and solo concerts, early music and contemporary music, world music, jazz, and dance – a variety that fortifies the programming of the Dresden Music Festival.

Since the 2009 season, Jan Vogler has been intendant of the Dresden Music Festival. In] growing the footprint of the music festival, his vision is “to sustainably fortify Dresden’s attraction as a cosmopolitan, heterogeneous and lively metropolis of culture and to turn it into Germany’s most significant authority of the international festival circuit”. As Intendant, he supports the idea of tolerance and encountering of people from all over the world in Dresden through the power of music.

Founded in January 2016 with offices in in Hannover, Germany and New York, NY, Dorn Music consists of an initial team of five, including two full-time, multi-lingual artist managers working alongside Dorn. The agency is furthermore cooperating with specialists in the fields of travel, logistics, marketing, finance, law and IT. Dorn Music offers complete management support at the highest level, with a dedicated individual approach to developing a healthy, long-term career for each performing artist. Additionally, the agency has been producing music films, including New Worlds: The Cradle of Civilization which premiered at the 74th International Cannes Film Festival, and concerts at acclaimed international venues including sold-out concerts at Hamburg’s Elbphilharmonie and at Carnegie Hall in New York presenting Bill Murray, Jan Vogler & Friends.