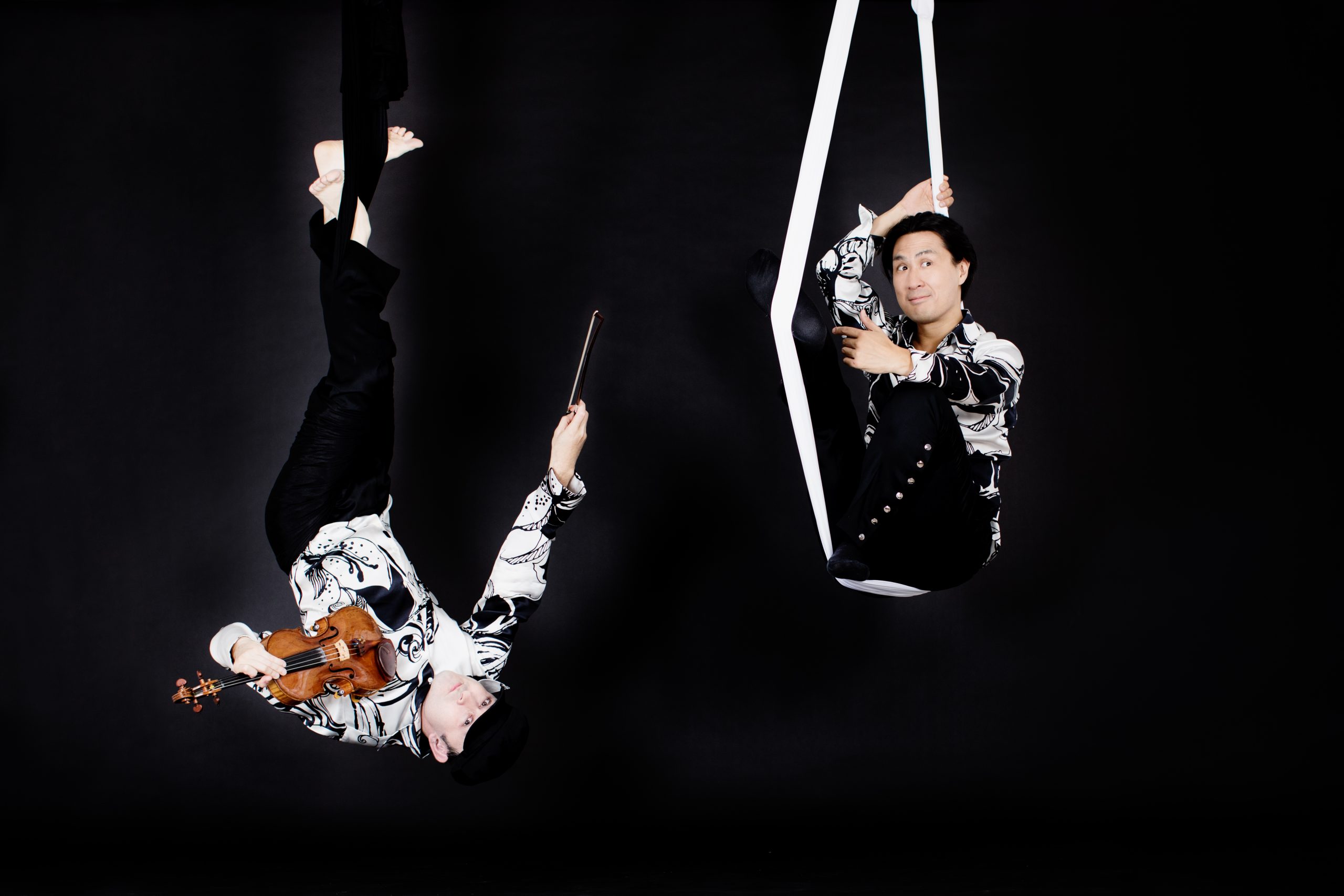 Igudesman & Joo will tour their critically acclaimed shows Play it Again and Happy Concert in April and May 2022. The shows, in which classical music, theater, and comedy collide, are written and conceived by Aleksey Igudesman and Hyung-ki Joo. Performances presented by Texas State University at San Marcos, the Lensic Performing Arts Center, the Gilmore Keyboard Festival, the Carpenter Center for the Performing Arts, and the Winston-Salem Symphony, will take place from April 28 – May 22, 2022.

“Describing the Igudesman & Joo humor in detail would be to deflate its brilliance. For the put-upon Igudesman, think Jack Benny and Jascha Heifetz rolled into one. For the zany Joo, try an unholy Chico Marx, Vladimir Horowitz and Jerry Lewis mash-up… two miraculous performers“ -Los Angeles Times

About PLAY IT AGAIN
Often the best parts of the concert are the encores. So why not start with them? Although no two performances of IGUDESMAN & JOO’s are ever really the same, Play it Again explicitly promises that each night will be wildly different from the other.

About HAPPY CONCERT
Happiness. Is that not what we are all looking for?
Well, look no further because Igudesman & Joo are serving happiness on a silver orchestral platter for you. Featuring music by Beethoven, Tchaikovsky, Mozart, Morricone, Strauss, Pharell Williams, Erran Baron Cohen, and original music by Aleksey Igudesman and Hyung-ki Joo, each serving comes with a boost of happiness that will leave you immunized, boosted, and insured against (most of) the most dire of worries- at least for a good 80 minutes or so.

Aleksey Igudesman says “The best thing about our shows is the laughter of the audiences. I think that after everything concert-going life, and life more broadly, has gone through in the last two years, it is time we remember that laughter and humor can be one of the most important tools in bringing people together. That’s why we’ve brought PLAY IT AGAIN to the US for this tour. It is about everyone’s favorite part of the concerts, the encores, applause, and the hilarity”

Hyung-ki Joo says “What our shows do are bring a totally retro sensibility back to the concert hall, a time when Franz Liszt used to drink wine with the audience and when soloists would do tricks with their bows between movements. Apart from that, we are so thrilled to be back in the United States after so much time. We are making debuts in some fantastic cities and returning to some of our most beloved towns and concert halls and finally being able to laugh with our audiences again.

About IGUDESMAN & JOO
With more than 50 million views, the inspired lunacy of musicians IGUDESMAN & JOO has been turned into a viral and international sensation. Equally at home in classical concert halls as in 18,000-seat stadiums, IGUDESMAN & JOO’s zaniness and virtuosity have inspired millions, bringing younger audiences to classical music.
In their uniquely hilarious theatrical shows, Aleksey Igudesman and Hyung-ki Joo combine humour and classical music with pop culture. They’ve performed with the world’s leading orchestras, including the New York Philharmonic, the Chicago Symphony Orchestra, the L.A. Philharmonic, the London Philharmonic, the Tonhalle-Orchester Zürich, and the Orchestra dell’Accademia Nazionale di Santa Cecilia.
As composers, IGUDESMAN & JOO have collectively released over 50 publications with Universal Edition. They’ve been commissioned by the Pittsburgh Symphony, Düsseldorf Symphony, Vienna Symphony, Tonhalle-Orchester Zürich, and the New York Philharmonic.
In autumn 2019, IGUDESMAN & JOO published their first book, Saving the World, released by Austrian publisher, edition-a. The book explores how we can save the world through creativity and humour. Their show Saving the World, premiered at the Konzerthaus Dortmund in 2019.

Carpenter Center for the Performing Arts at CSULB

Winston-Salem Symphony at the Stevens Center for the Arts