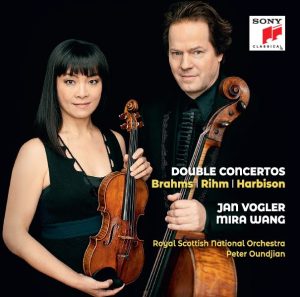 The new CD by cellist Jan Vogler and violinist Mira Wang was released by Sony Classical in May 2018 and got a couple of stunning reviews so far.

“It never feels as if the violin and cello are pitted aggressively against each other. It rather is more like a dialogue between cultured minds with views sometimes opposing, sometimes like-minded. In Wang and Vogler’s performance a predominantly edgy, anxiety-laden character contrasts with an air of relative calm and reflection of an autumnal hue. A curious sense of mystery is never far away.”

They “are in quite glorious form. One senses a special connection between the partners, notably their strong focus, immaculate phrasing and articulation” with “an exquisite sound, glowing and rich in tone”. The RSNO under Peter Oundjian is described as “unified, committed and entirely sympathetic. […] The sound is outstanding, slightly warm, especially clear and with satisfying balance.”

Their conclusion: “A valuable album, a combination of an established masterpiece with two contemporary works, which could hardly receive better advocacy.”

“The two soloists enter a perfect symbiosis with the Royal Scottish National Orchestra under Peter Oundjian, but all show their profile at the same time. Exciting line of direction and tonal richness to the last beat. Brahms’ magnificent opus with its broad range of expression captivates increasingly. And John Harbison’s seductive double concerto in three highly expressive iridescent movements turns into a firework of colors. Dedicated recording with a signature reference.”