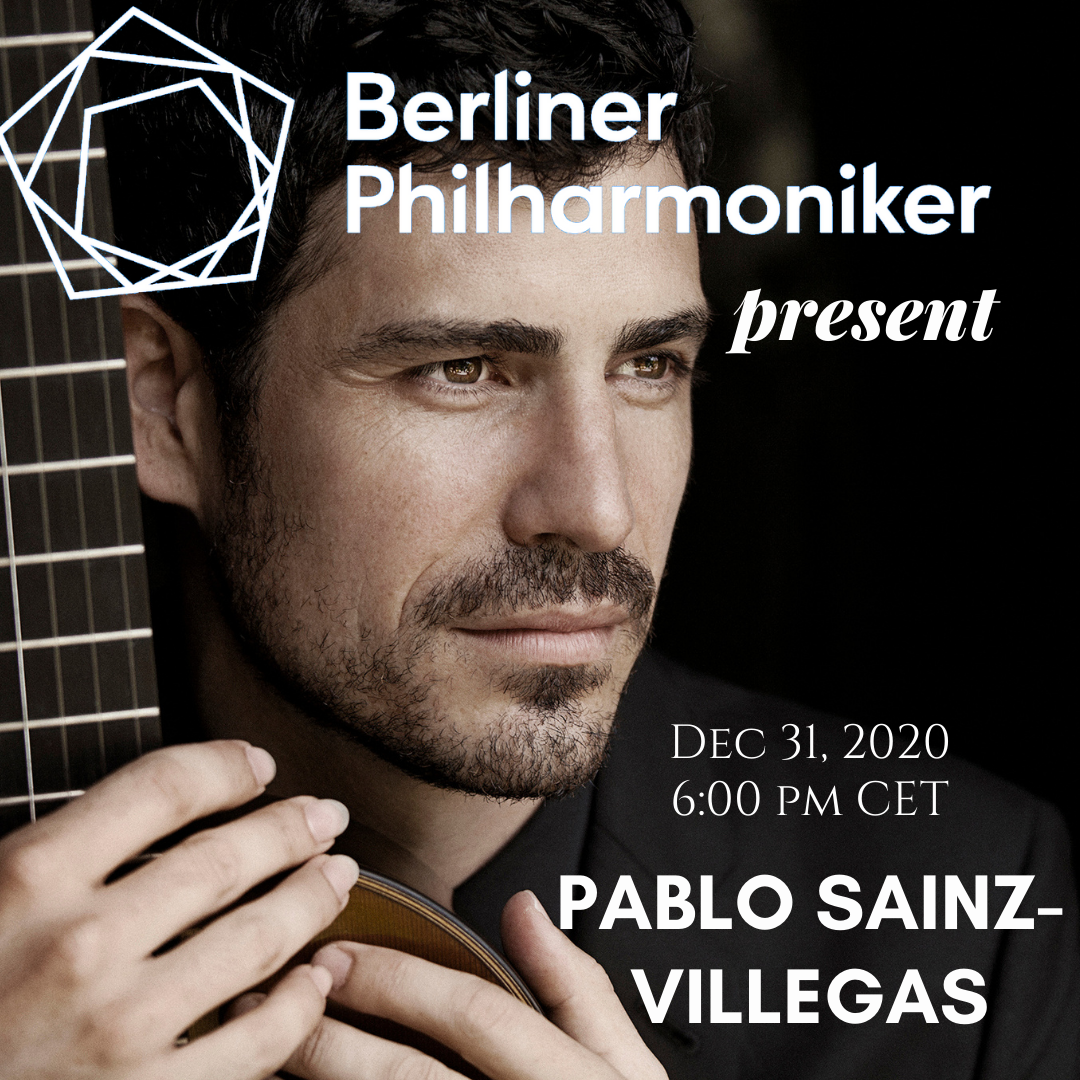 Regarded as one of the world’s leading soloists on his instrument, Pablo Sáinz-Villegas embodies “the soul of the Spanish guitar” and has long been internationally acclaimed as an ambassador of Spanish culture.

Pablo Sáinz-Villegas has been acclaimed by the international press as the successor of Andrés Segovia and an ambassador of Spanish culture in the world. Since his debut with the New York Philharmonic under the baton of Rafael Frühbeck de Burgos at the Lincoln Center, he has played in more than 40 countries and was invited to perform with orchestras such as the Chicago Symphony, Israel Philharmonic Orchestra, Los Angeles Philharmonic, and the National Orchestra of Spain, making him a benchmark for the symphonic guitar.

Plácido Domingo has described him as “the master of the guitar” and with him he has had the privilege of recording his duo album Volver, released in 2018 by Sony Classical, as well as participating in the tribute held in his honor at the Santiago Bernabéu stadium in Madrid to an audience of over 85,000 and also in a concert on a floating stage on the Amazon River, televised for millions of people in the world.

His “… virtuosic playing characterized by irresistible exuberance” (The New York Times) make him one of the most acclaimed soloists by prestigious directors, orchestras, and festivals. Recent Highlights of his international tours with orchestras include Amsterdam Sinfonietta, the National Orchestra of Spain or the New Zealand Symphony. Last season, Sáinz-Villegas made his debut at Chicago’s Grant Park Music Festival to an audience of 11,000 people and at Praça do Comercio in Lisbon with the Gulbenkian Orchestra. He returned to the Rheingau Music Festival, performed his debut concert with the Tonhalle-Orchester Zürich and is looking forward to his return to the summer nights in Amsterdam.

Pablo Sáinz-Villegas has already appeared on some of the world’s most prestigious stages including Carnegie Hall in New York, the Philharmonie in Berlin, Tchaikovsky Concert Hall in Moscow, the Musikverein in Vienna or the National Arts Center in Beijing. Habitual performer in concerts of institutional and business representation, he has had the privilege of playing before members of the Spanish Royal Family as well as other heads of state and international leaders such as the Dalai Lama.

He has recorded with the National Orchestra of Spain under the baton of Juanjo Mena the three concerts for guitar and orchestra by Joaquín Rodrigo including the popular Concierto de Aranjuez. He has also recorded for the record label Harmonia Mundi the album Americano which is a journey through the musical affluence of the American continent. Currently, Pablo Sáinz-Villegas is an exclusive artist of SONY Classical with his latest release Soul of Spanish Guitar marking his solo debut album on the label.

A tireless promoter of development of the repertoire for Spanish classical guitar, Pablo Sáinz-Villegas has made numerous world premieres among which Rounds, the first composition for guitar by five-time Academy Award-winner John Williams, as well as for the composers Tomás Marco, David del Puerto and Sergio Assad.

Pablo Sáinz-Villegas has accomplished an impressive collection of over 30 international awards among which include Andrés Segovia, Francisco Tárrega, and Christopher Parkening. Likewise, it has been awarded the “Galardón a las Artes Riojana” and the “Ojo Crítico” Award from Radio Nacional de España, this being the first time that this distinction has been granted to a guitarist.

Artist socially committed to the current world, Pablo Sáinz-Villegas founded in 2006 the philanthropic project “The legacy of music without borders”, whose mission is to bring music to people as a mean to humanize their environment and promote understanding between different cultures. Thanks to this project he has shared his music with more than 32,000 children and youth in Spain, Mexico, and United States.

Pablo Sáinz-Villegas was born in La Rioja in Northern Spain and since 2001 he lives in New York City.

Pablo Sáinz-Villegas is represented in Europe by Dorn Music.