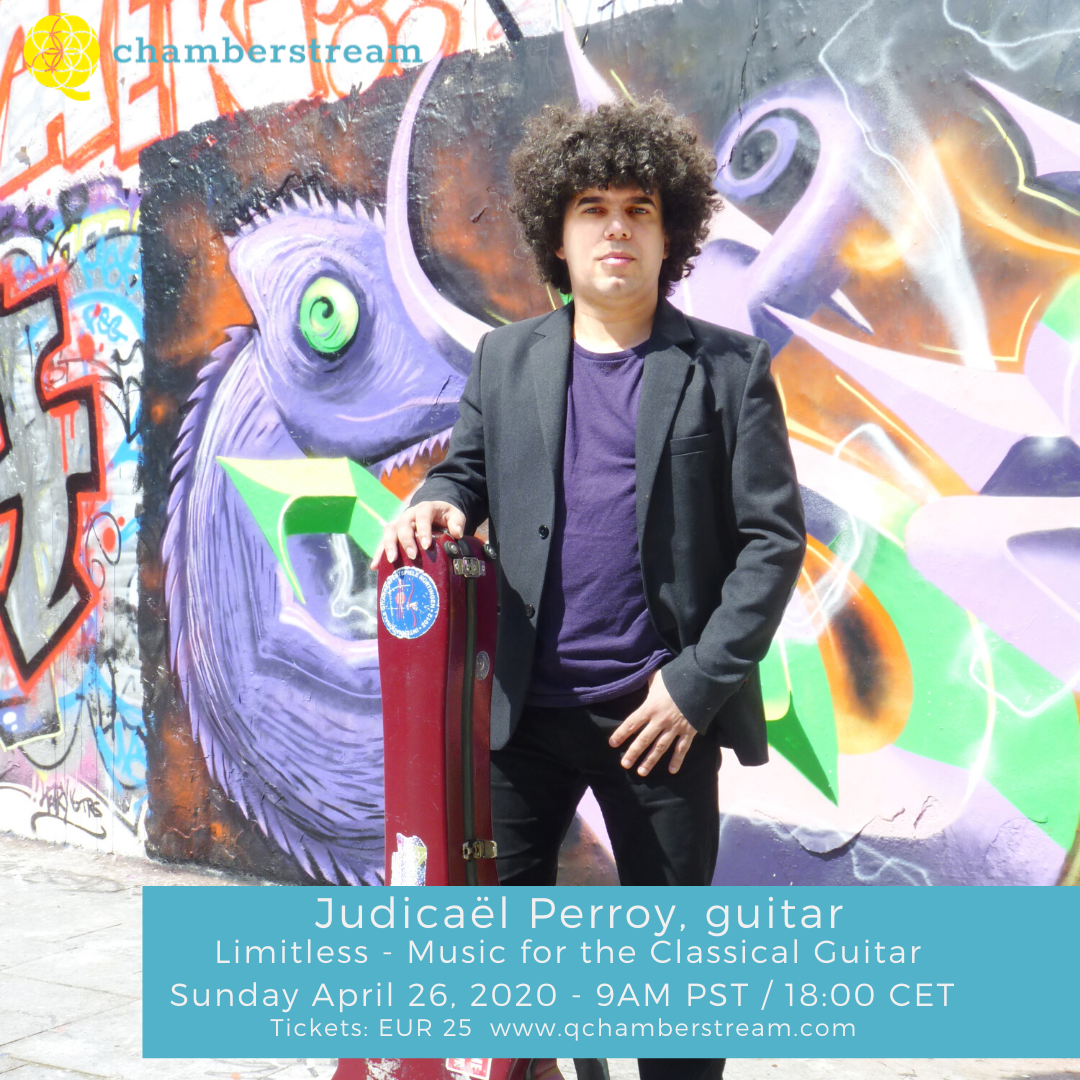 “For the first stream from California we are delighted to work with French guitarist Judicaël Perroy who is based in San Francisco. He has been celebrated internationally by press and audiences alike for his stunningly brilliant and intense playing. We launched QCHAMBERSTREAM.com in Hannover, Germany, in early April to great success. I am now greatly looking forward to the first concert from Los Angeles.” – Tanja Dorn, founder of Dorn Music with offices in Hannover, Germany and New York, NY.

“It has paid off to keep both the musical and the audiovisual quality as high as is possible, and we are seeing that viewer’s remain with us for a long period of time. The next stream from Los Angeles will showcase a completely different quality chamber performance, both visually and acoustically. We are proud and grateful our longstanding technology partner in the US, Gravity Media, has welcomed us into their home for a fantastic performance with Judicaël Perroy. Paul Fenkart of BFMI USA will direct.” – Bernhard Fleischer, leading producer of concert broadcasts.

“I am humbled and excited to be a part of QCHAMBERSTREAM.com in times in which musicians across the world are being impacted. This is a unique opportunity to share the art of the guitar with a wide audience around the world. Let’s use this time to put the current situation aside and look with hope to the future.”

Tickets are EUR 25 each at www.qchamberstream.com
Allowing the viewer to experience the concert LIVE on one device on April 26, 2020 9:00 PST / 12:00 Noon EST / 18:00 CET
or as a catch-up on the QCHAMBERSTREAM.com channel within the week after

French guitar phenomenon Judicaël Perroy has become widely known as an extraordinary virtuoso classical guitarist and musician with several prizes to his credit. In 1997 he captured the prestigious first prize of the 15th Guitar Foundation of America International Competition and Convention, awarding him tour of the United States and Canada with more than sixty concerts and master classes. He tours extensively throughout the world and has made a number of recordings,  including a CD with flutist Florence Bellon and another with harpist Joanna Kozielska. His recording has been awarded many prices including 5 Diapasons.  More recently, he recorded an all Bach CD for Naxos label which includes an impressive and unprecedented performance of Bach’s second keyboard partita transcription on the classical guitar. Widely considered one of the best guitar professors in the world, his students regularly gather prizes around the world and have recorded for Sony Music France and ERATO. Since 2017 Perroy is a Professor at San Francisco Conservatory and continues to teach at the Conservatoire de Lille in France.

Marc Genin​, Executive Vice President of Gravity Media:
“Gravity Media is known for embracing new opportunities, exploiting new technologies and helping its clients launch new initiatives. Gravity Media has worked with BFMI for many years on performing arts broadcast projects that have involved such world renowned companies as the Los Angeles Philharmonic and the San Francisco Ballet, and has built a reputation as a specialist in creating high end performance programs for the screen. We are delighted to join the qchamberstream.com initiative and look forward to welcoming Judicaël Perroy at our Production Center in California.“

NOTE
Tickets are still available to view the catch up of our April 13 QChamberStream with Elisabeth Kufferath and Kiveli Dörken until April 21. Previously purchased tickets will also permit access until April 21.