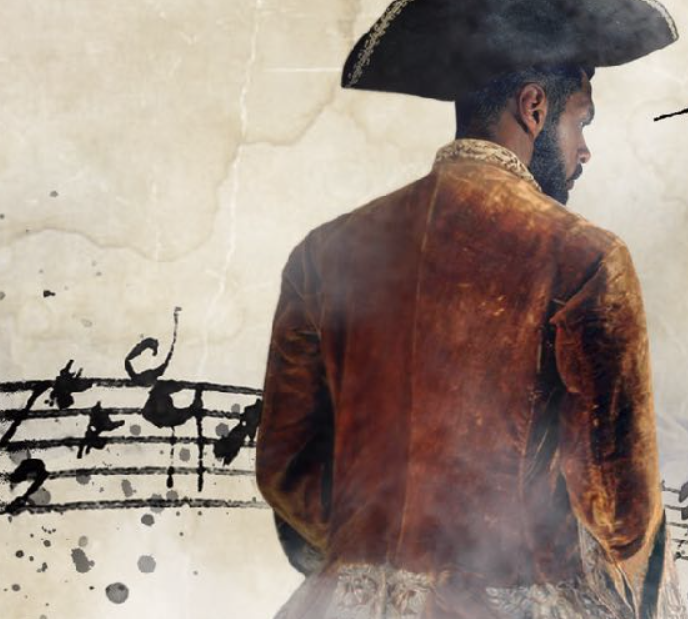 We are thrilled to be welcoming writer and director Bill Barclay’s latest play with music The Chevalier: Joseph Bologne, Chevalier de Saint-Georges.
Four actors and solo violin reveal Joseph Bologne’s true friendships with Mozart and Marie Antoinette, featuring Bologne’s finest music for orchestra. The Chevalier is the centrepiece of an international advocacy campaign for racial representation across the US and EU orchestra ecology.
Commissioned by the Boston Symphony Orchestra for a world premiere at the Tanglewood Learning Institute’s inaugural season in 2019, The Chevalier was also selected as a finalist in the Eugene O’Neill National Playwrights’ Conference in 2021.
“Bologne is not only the first major Black composer, he was one of the first artist advocates, fighting for the abolishment of slavery while coding equality into his music. It is unconscionable that he is not widely celebrated, played, taught, and understood. This powerful story is just the beginning.” says Bill Barclay, writer and director of The Chevalier and artistic director of Concert Theatre Works.

Son of a slave and French aristocrat, Joseph Bologne has reached the top of his game – music teacher to Marie Antoinette and Europe’s fencer to beat. But when a bedridden Mozart is carried into his kitchen, he attracts the attention of a secret police force returning people of colour to slavery.

As Paris hurtles toward Revolution, Bologne is forced to choose between his creative freedom and the crusade for equality. Can he sacrifice his bow for his sword? This is the true story of three immigrants – Marie Antoinette, Mozart, and the Chevalier – conflating the French Revolution with the Resistance against authoritarianism unfolding today. The full-length stage play will continue to be workshopped throughout 2021.

The ‘concert theatre’ tour with just four actors intersperses Bologne’s finest movements with dramatic and comedic scenes. It can either tour with an ensemble of 7, or perform with the orchestra. The 80 minute show can accompany a talkback on racial equity in the arts, as well as both lectures and masterclasses for universities.

This story is attributed to the work of Margaret Casely-Hayford CBE, Chi-chi Nwanoku OBE, and Gabriel Banat, whose passionate efforts have brought The Chevalier to life.