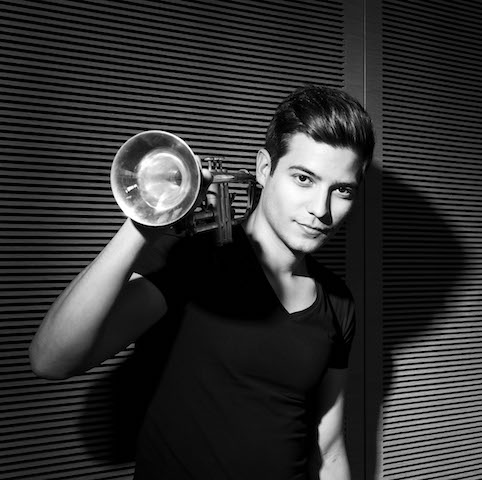 His one of a kind technical skills aside, Tamás Pálfalvi already stands out as one of the most visionary and innovative trumpet players of today.

Tanja Dorn, Owner and President of Dorn Music says about Tamás:
“Since meeting and hearing him for the first time we were majorly impressed by his humanity, rare artistic curiosity, performance energy, excitement and extraordinary musical skills and instincts.”

„I am very honored and excited to have found such a strong partner in the Dorn Music Team. I am really looking forward to our future“, states Tamás.

Enormous virtuosity, stage presence and extraordinary musical concept won him first place at the Fanny-Mendelssohn-Förderpreis, a German competition that was created to reward not only the performance of young musicians, but also their conceptual skills and creativity. Additionally he was awarded with the WEMAG Soloist Award at Festspiele Mecklenburg-Vorpommern.
His debut CD Agitato, accompanied by the Franz Liszt Chamber Orchestra and released in September 2015 by Berlin Classics, is further reference of his versatility. Works by Vivaldi, Telemann and Händel are effortlessly intertwined with contemporary works by Ligeti, Kagel and Dubrovay. The CD was met with rave reviews internationally such as Bayerische Rundfunk listing it as CD of the Month and Norddeutsche Rundfunk as CD of the Week.

Upcoming highlights include his performances at Frauenkirche in Dresden, Festspiele Mecklenburg-Vorpommern and the Chosen Vale Trumpet Seminar in New Hampshire, Gezeitenfestival, Germany as well as performances with the Franz Liszt Chamber Orchestra and the Bayerische Kammerorchester.

Born in Hungary in 1991, Tamás took up trumpet lessons with István Szabó at the age of 8 and joined the Leó Weiner Conservatory of Music in Budapest in 2005, where he studied under Gábor Huszár. In 2009, he was awarded a scholarship for Bard College in New York, where he studied unter Carl Albach until 2012. He then returned to Budapest to study at Franz Liszt Music Academy under Gábor Boldoczki, where he received his Master’s degree in May 2016.

Tamás has received numerous prizes, such as the National Trumpet Competition at the age of 15 as well as the Junior Prima Prize, the most important recognition for young musicians in Hungary. He was the first trumpet player to win the Bard College Concerto Competition. Further distinctions include awards from the Chicago Brass Festival and several competitions across European cities such as Prague, Chieri, Cluj Napoca and Brno.

Tamás performs on Adams instruments and has developed a new design for the C-trumpet together with the company. They are currently working on a new E-flat trumpet.
Besides the classical trumpet he also plays Flugelhorn and Baroque trumpet.